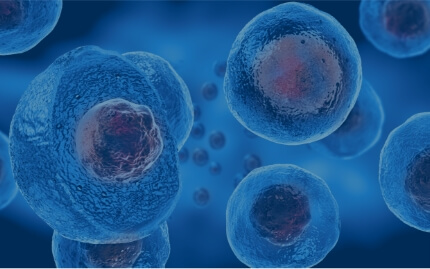 Support for all stages of process development

Porton Advanced offers flexible process development support options to suit the needs of our clients, including pre-clinical, clinical phase I, II and III, and commercial stage of drug product development. Our process science teams are well trained and have extensive knowledge and experience in the relevant specialties.

Effective and efficient technology transfer is key to the success of CDMOs. At Porton Advanced, we have an established tech transfer process in which we take a stepwise approach, starting with a gap analysis of the raw materials, cell banks, USP, DSP and DS/DP manufacturing. The analysis and assessment consider, process equipment and parameters across USP/DSP, critical quality attributes against the ‘target quality product profile’ of the drug product, etc. Our specialized tech transfer team will perform in-depth assessments to ensure appropriate resources are allocated, development time and costs are balanced, and timely delivery can be achieved without compromising quality. 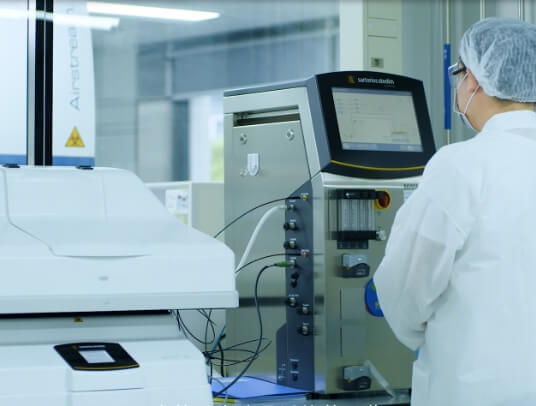 For clients and projects that require process development support, we provide a full range of tailored services, including scale-down modeling for process development, design of experiments (DOE) for process optimization see Figure 9, and scale-up processing to meet different scales of production. We are also able to support NDA submissions, by applying quality by design principle, and aiding process characterization and validation.
View Figure 9

Our dedicated analytical development teams are experienced in all commonly used assay platforms, including for identity, quantity, purity, safety, and potency, across cell therapy, viral vector, virotherapy, mRNA, and plasmids. This enables them to respond effectively to address the full spectrum of our clients’ needs, in incoming, in-process, DS and DP production, and stability monitoring testing.

For clients with established analytical methods, we perform a transfer and verification process, which will be faithful to the original protocols and regulatory compliance

Our analytical development (AD) laboratories are equipped with a large collection of state-of-the-art analytical instruments. Our teams are well trained and have broad expertise across different analytical technologies, such as molecular, cellular, proteomic, biological and biochemical analyses. We apply DOE practice in assay development and optimization, and have established robust analytical capability and capacity in a variety of product- and process-specific assays, including for potency, identity, purity, quantity, yield and safety. 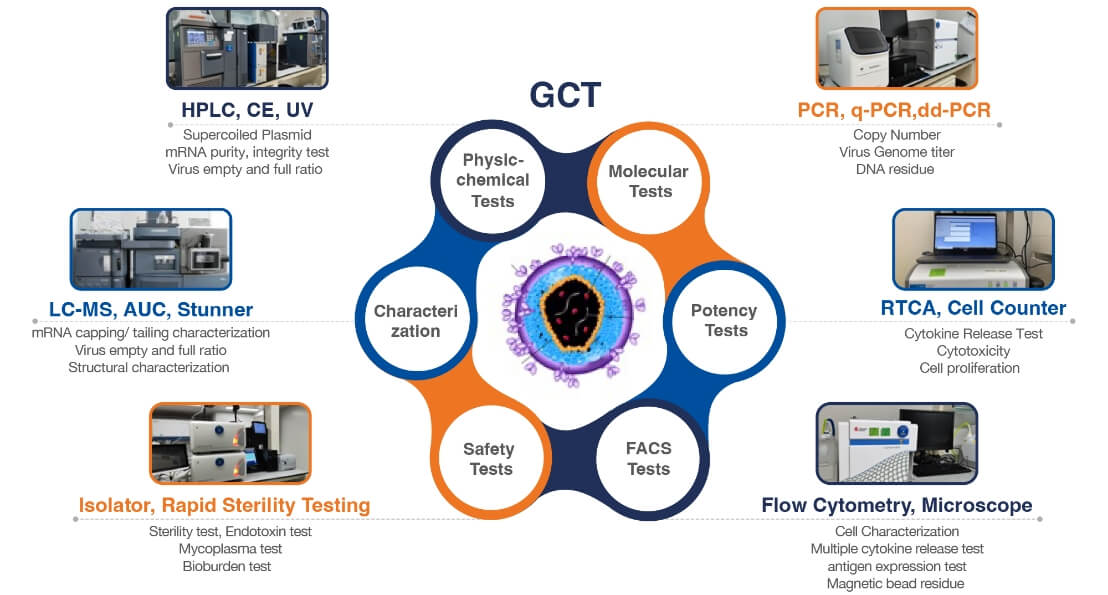 The ratio of supercoiled plasmid is a key index of the certificate of analysis (COA) for transfection efficiency. Figure 10 shows a chromatogram of supercoiled ratio testing of a plasmid by anion exchange chromatography. The supercoiled peak and the open circle peak are well separated.

According to regulatory requirements, lentivirus (LV) products cannot contain DNA fragments greater than 200bp. We have developed a capillary electrophoresis method capable of determining the size of DNA fragments Figure 11. The DNA fragments in the LV drug product (DP) are compared with control markers to ensure that they are less than 200bp 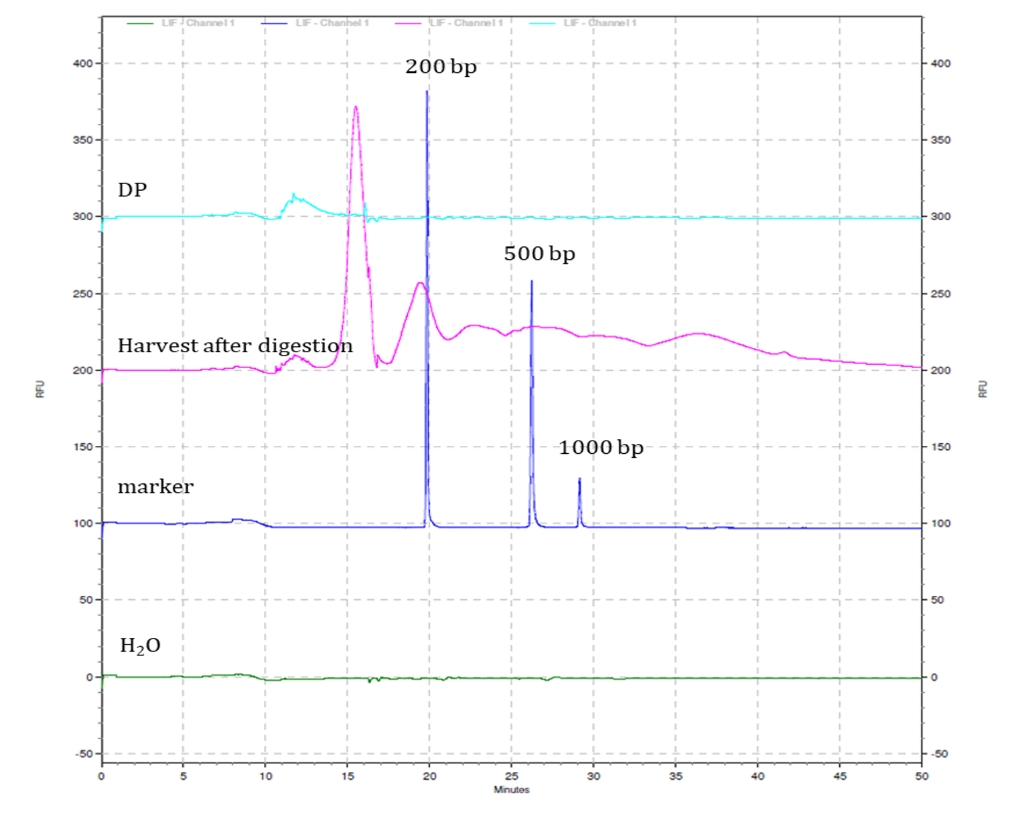 Multiple factors influence the outcome and durability of CAR T-cell products, including the potency, purity, proliferation and persistence of the CAR-T cells Figure 12. The technical strength of our analytical development team is exemplified by their ability to readily detect and monitor the circulating CAR T-cells during the manufacturing process. The team is committed to innovation and our state-of-the-art analytical methods allow us to simultaneously analyze different cell surface markers and intracellular and nuclear proteins.

Figure 12
Immuno-phenotype of PBMC (A&B) and potency of NK cells (C) characterized by FACS. In A and B, cell surface molecules (such as CD3, CD56, CCR7, CD45RO etc.) were stained to analyze the NK and memory T-cell subsets (Tscm/Tcm/Tem) in the PBMC samples. Perforin is one of the major effector molecules used by natural killer cells and cytotoxic T lymphocytes to mediate target cell lysis. Figure C shows expression of perforin in the NK product sample.

Cytotoxicity monitoring is validated using CAR-T cells as effector cells over TAA-positive and TAA-negative cancer cells as targets. As shown in Figure 13, when seeded alone, target cells adhere to the plate and proliferate, increasing the Cell Index (CI) readout. When CAR-T cells are added to the target cells, they cause TAA-positive cell cytolysis and subsequent progressive decrease in CI.

In addition to the RTCA method, we have also developed several other potency assays such as Luciferase, CFSE/DAPI or PI or 7-AAD, Calcein-AM, etc., to meet differing customer demands.

AAV particles tend to accumulate and form aggregates, which not only reduce the infectivity of AAV products, but also pose safety risks, resulting in a requirement to test particle size distribution in AAV products. 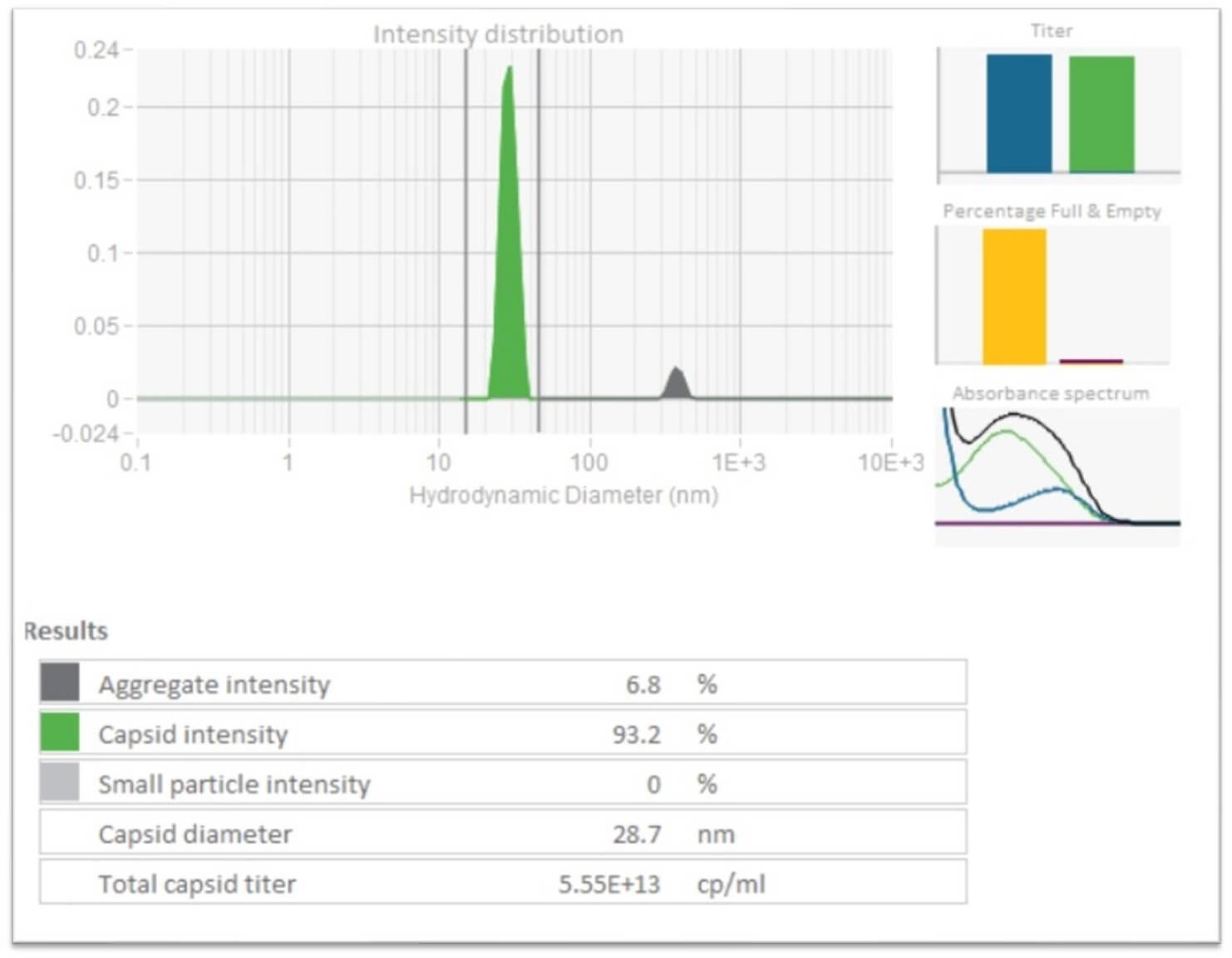 Figure 15
The size distribution of AAV measured by Stunner instrument

The AAV genomic titer is an important assay for dosing, where qPCR and ddPCR have been used (Figure 16 A, B). ddPCR is an absolute quantitative method, enabling better accuracy and precision than qPCR.

We offer clients both ddPCR and qPCR assay development services to meet their varying needs.

Figure 16A
AAV gene titer measured by ddPCR with LOD at 3 copies, LLOQ at 20 copies, and UUOQ at 1E5 copies

Figure 16B
Summary of the result range and the change of CV% of the genomic titers of 11 samples detected by qPCR and ddPCR.
mRNA

The length of Poly-A tail impacts the stability and functionality of mRNA products.

At Porton Advanced, we have developed an LC-MS (high performance liquid chromatography coupled with mass spectrometry) method that can be used to characterize Poly-A tails in mRNA products Figure 17.

Figure 17
Characterization map of Poly-A tail in mRNA by LC-MS.

Accommodating your needs from pre-clinical to commercial phases

We make the most of our new 160,000 ft2 state-of-the-art GMP facility by helping our clients manufacture GMP products to facilitate their cell and gene therapy clinical trials and commercial operations

Our technology capability and manufacturing capacity are well recognized and valued by our clients, particularly our ability to provide end-to-end support, including plasmid manufacture, MCB/MVSS, DS/DP and Fill/Finish. We offer both non-GMP and GMP manufacturing to suit our clients’ different needs at either pre-clinical or clinical and commercial phases.

Our GMP suites include GMO/BSL-2 compliant facilities for live viruses and viral vectors, and ISO 5/7 cleanrooms (Grades B and C). In our Grade B cleanrooms we can perform all aseptic processes necessary to meet clients’ needs, including when 0.22 µm filtration is not an option in gene therapy manufacturing, or when a full scale, closed system is not available in cell therapy production, such as for allogeneic cell therapy platforms.

When initiating a cell and gene therapeutic manufacturing program, it is critical to establish quality GMP master cell banks and viral seed stocks as starting materials. Our experience in MCB/MVSS GMP manufacturing empower us to better service our clients. Our teams excel in cell and viral banking, characterization, cloning optimization, and GMP manufacturing.

We have extensive cell line experience, including in HEK293/T, HeLa, SF9, Vero, A549, and more. We offer de novo generation and recovery of infectious virions from plasmid-based systems (virus rescue), as well as genetic characterization, cloning optimization and seed screening for preliminary infectivity and titer. 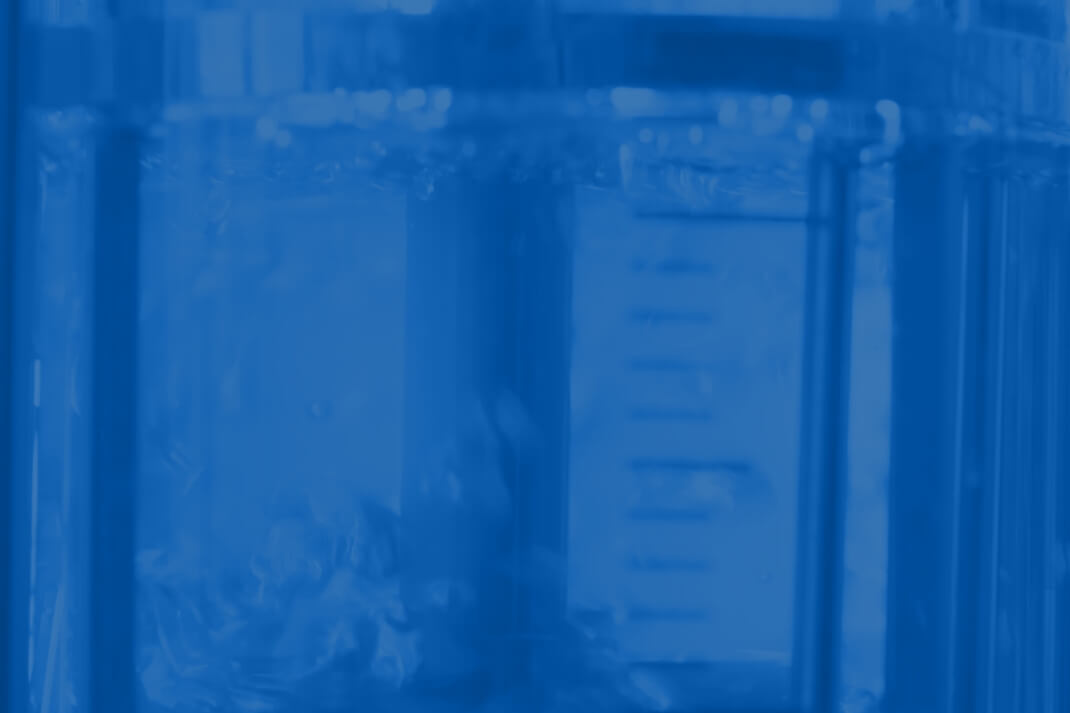 We offer both non-GMP and GMP manufacturing for viral vector gene therapy, cell therapy, oncolytic virotherapy and mRNA DS and DP. All our innovative manufacturing platforms are compliant with international regulatory agencies, including the FDA, EMA, NMPA, etc. We also provide CMC regulatory support for IND and NDA submissions.

With a dozen Quality Control (QC) labs, we offer complete QC assay packages, for manufacturing in-process, and DS and DP release testing for all gene, cell, and viral therapy products. Our robust QC capability and capacity are pivotal to DS and DP manufacturing, which ultimately ensure that patients are safe and get the maximum benefit from treatments. 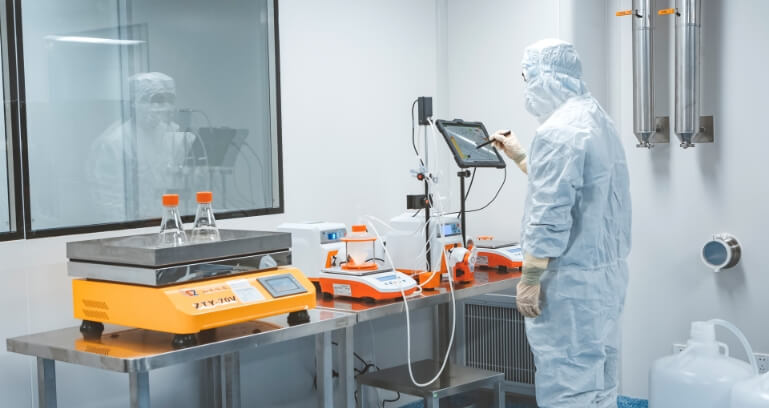 Our high-throughput fill/finish line allows us to produce up to 3,000 vials per hour and 12,000-24,000 vials per batch. We can provide fill/finish services to clients based on stand-alone requests, or as part of a broader working package from a project.

We have established a comprehensive offer of more than 200 testing procedures for incoming, in-process and DS/DP production, and stability monitoring across plasmid, cell therapy, viral vector gene therapy, oncolytic virotherapy and mRNA manufacturing. We deliver testing reports for non-GMP services and provide a certificate of analysis (COA) to clients when GMP testing is requested. Most non-GMP testing is product- or project-specific, such as potency, titer, purity, identity and safety assays in different cell and gene therapy area.

Scientists from our analytical development teams provide technical consultations to address any potential technical challenges in a timely manner. By assessing critical product quality and safety attributes, as well as the requirements of global regulatory authorities, our QA and QC teams guide the design of customized quality control testing packages that help advance each client’s programs.

We offer a broad range of testing services, for example:

Available AAV testing for HEK293 production system
Each strategy is based on the team’s deep understanding of the products and necessary testing methods, and are developed based on either USA, Europe, Japan or China pharmacopeia.

Setting Porton Advanced apart from other CDMOs, we have established a dedicated R&D team. We offer clients several proprietary technologies and help with their specific discovery research needs. 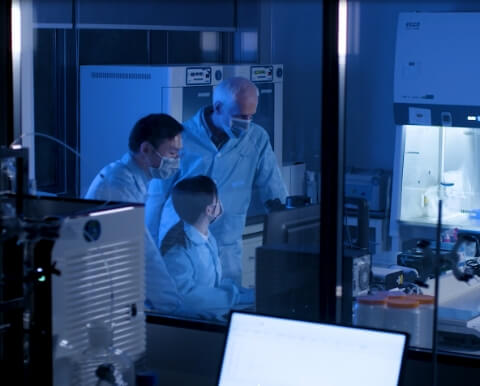 Combined with our proprietary packaging protocol, our packaging system reduces host DNA and protein contamination, significantly simplifying the downstream purification process. To-date, our HEK293T cell line has been used successfully in over 30 programs for our clients.

Based on knowledge and experience in structural and computational biology, our R&D team are experts in designing highly complex AAV capsid libraries.

In contrast to traditional approaches to library design, our proprietary two-step library construction system introduces global alterations across the capsid surface at precisely selected positions. As a result, our capsid libraries include high numbers (over 100 million) of functional variants, increasing the likelihood of significantly altered tropism and immune evasion properties. Our proprietary screening method enables us to get rid of the cytoplasmic viral genomes and reduce a large amount of the non-replicable viral variants background, making screening more efficient. 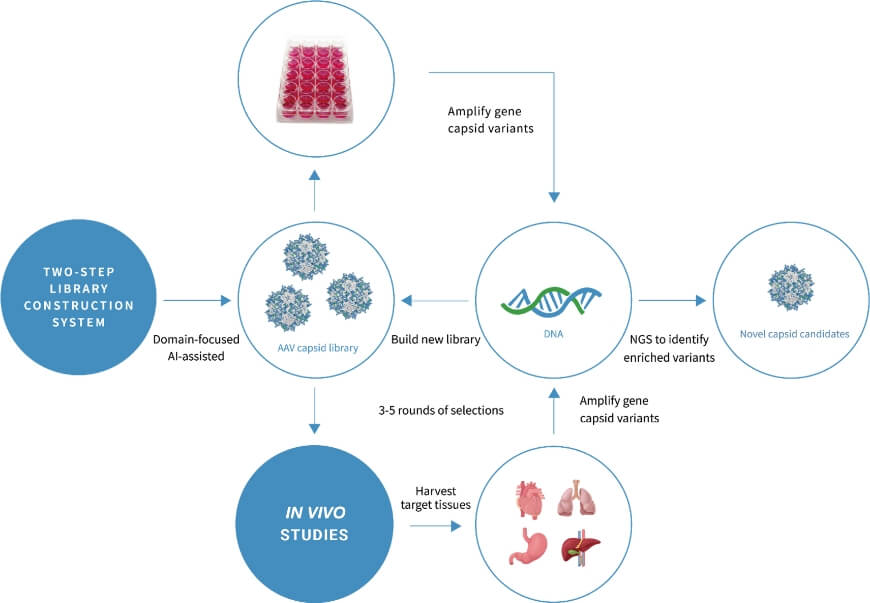 Figure 18 and Figure 19 show example results from our library screening approach, and an AAV variant with over 6.1KB capacity.
View Figure 18
View Figure 19

Join a committed and ambitious team 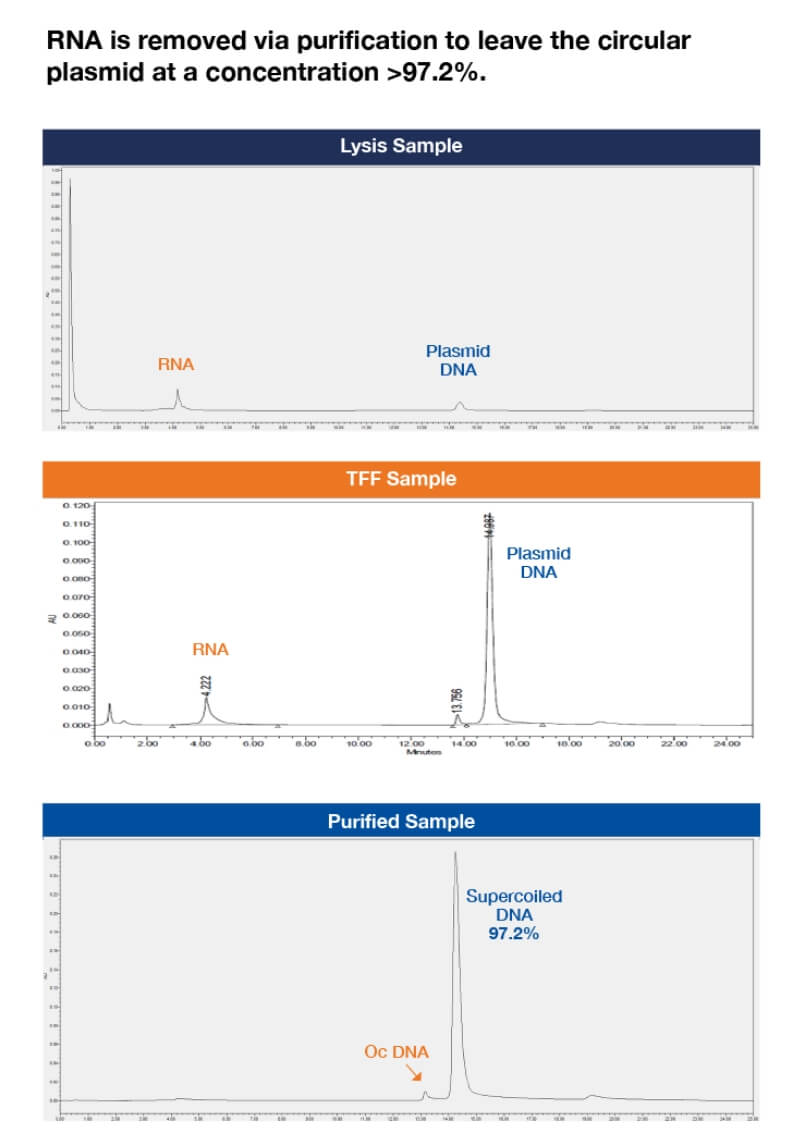 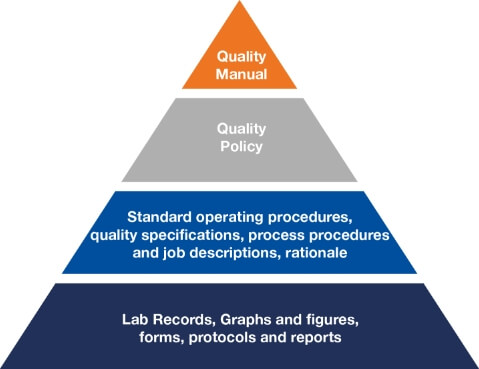 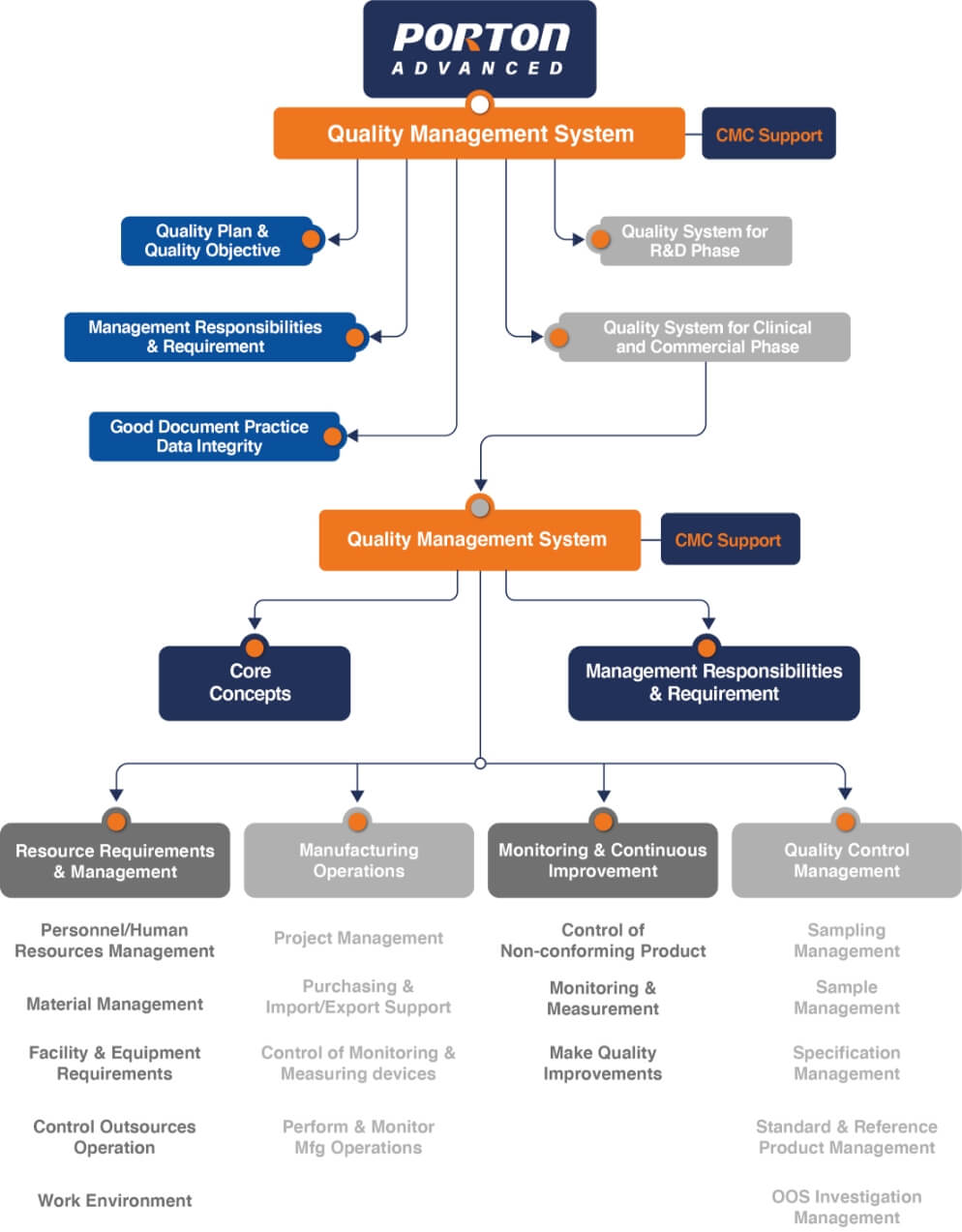 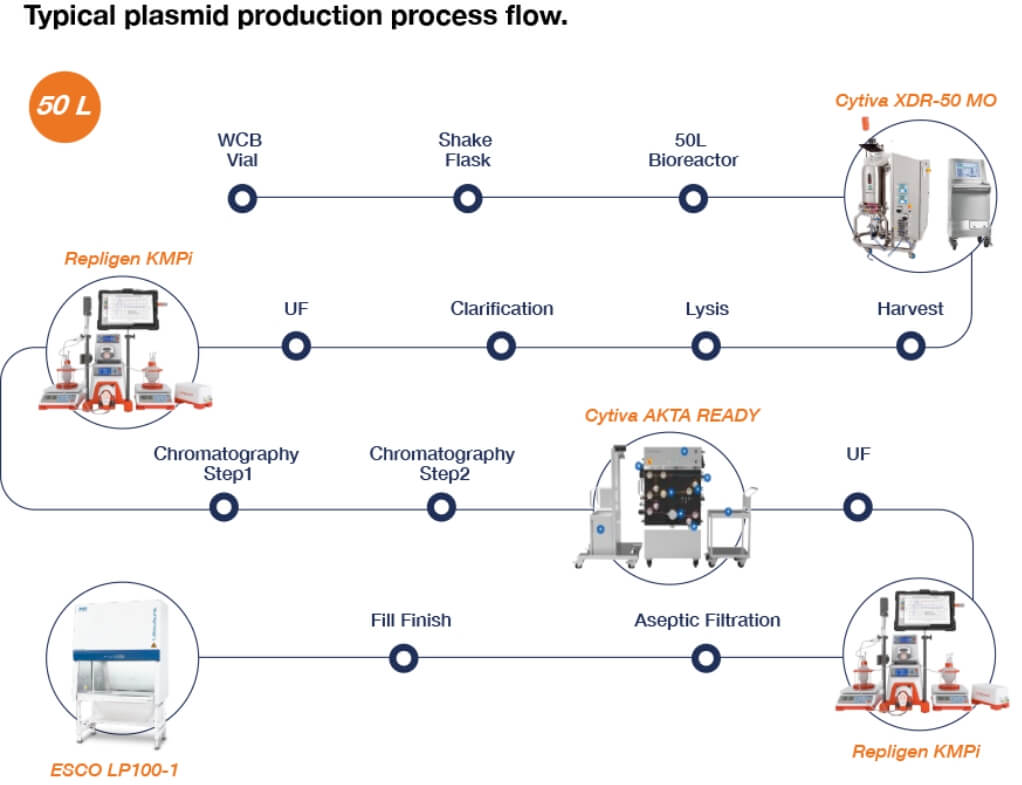 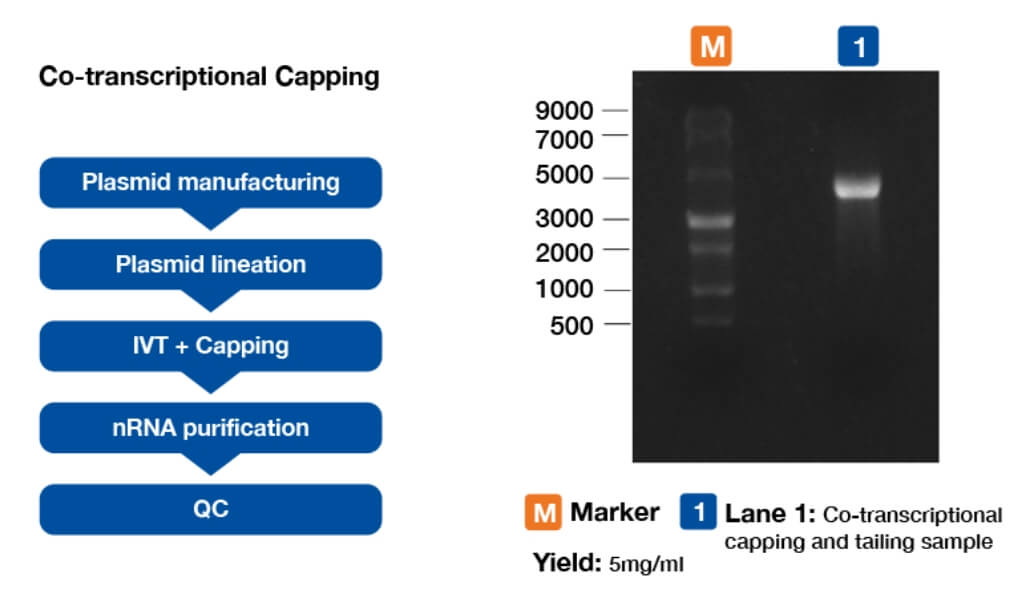 An AAV variant from our library screening showed that the virus was able to package a 6.1kb genome. 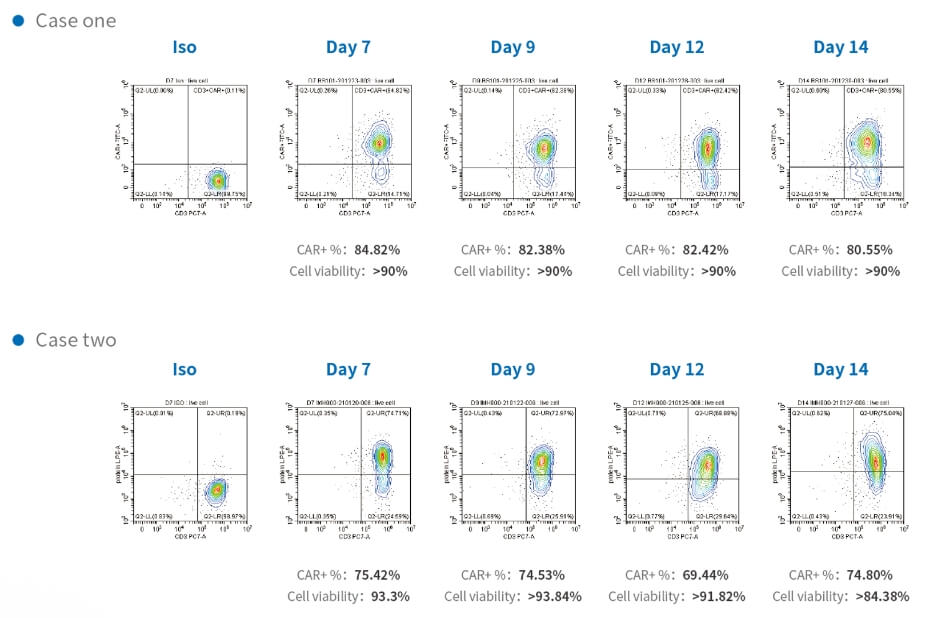